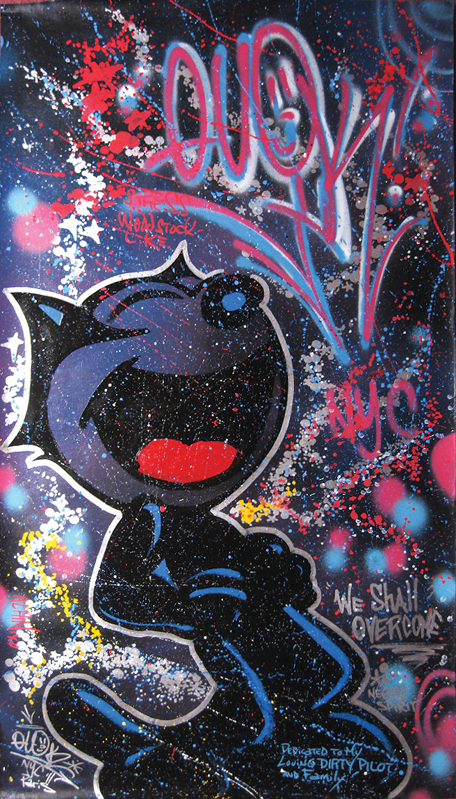 Join us as we welcome back our friend and Graffiti Legend QUIK. Check out new Quik large scale paintings, maps and other works on canvas all adorned with quintessential Quik color and imagery.

‘Quik’ Lin Felton (°1958) started tagging during the 1970’s in Hollis (Queens, New York), the neighbourhood were he grew up. He’s one of the few New York graffiti artists who made it to the art galleries and museums in the 1980’s. His work has developed far beyond the original tagging and although he preserved the spirit of the graffiti, he expanded at the same time their conceptual limits by introducing both social and personal topics into his paintings. The ‘Blues Paintings’ can hardly be described as ‘mere graffiti’. Through the themes as well as by the painting technique, Quik’s graffiti become more than ‘just’ writing. In a subtle, yet ironic way, a well considered balance between statement and sentiment is obtained. Although the canvases at first sight appear like fundamental socio-political critiques, they are still strongly autobiographic. It’s in this interaction between global and personal issues, that the artist as a Black American excels, by pushing the intends of his works beyond the ordinary manifest. As a matter of fact, in the way it deals with African-American life and history, the works of Lin Felton can be perceived as the complete antithesis of socio-political art. Through his works, the artist seems to wrap himself in a pleasant state of discomfort when playing with his ambiguous relation towards oppression. On the one hand, he sings the sorrow of the Black Man through his paint sprayers, but on the other hand he expresses a kind of deeply erotic pleasure by adopting an underdog position towards women. This sometimes confusing duality is not only visible at the conceptual level, but also through the painting technique. ‘Quik’ is well aware of his artistic predecessors and he regularly winks towards art history. Inevitably one recognises Jasper Johns ‘Flag’ or Roy Lichtenstein’s paradigmatic way of representing women in strong black outlines. But despite these elements taken popular culture, Lin Felton can not be considered a Pop artist. Opposite to his well controlled and colourful, almost canonised figurations, stands a hand that paints with a big amount of bravado.

Instead of bright colours, his pallet turns dark, and strong outlines and forms become very irregular. In this way, his interest in painting itself becomes more important than the actual representation, as is for example shown in ‘Enter the King’ (2007). The path chosen by the paint dominates the hand of the artist. The Pop imagery has to make place for a very expressionistic way of rendering, which even tends towards voodoo, as if the painter tries to enchant the spectator in ‘Wall of Sleep’ (2007). Or is it a well considered reference towards the American Abstract Expressionists? Either way, the combination of well known, joyful representations versus a very personal and obscure touch, creates a quite contradictory but pleasant sense of uncanniness, as illustrated by ‘Come ‘ere Lil’ man’ (2007). In this work, a naïvely painted middle-class man becomes the ‘object of desire’ of an almost witch-like dominatrix. This lustful but still obscure way of representing women throughout painting is a regularly returning subject, both in ancient and contemporary art”. But despite their art-historical references, the paintings of Lin Felton have their roots in the streets, where history and theory are subordinate to the representation of personality and style. If graffiti are colourful parasites on the urban image, then Lin Felton’s ‘Blues Paintings’ are their offspring, feeding on contemporary art.