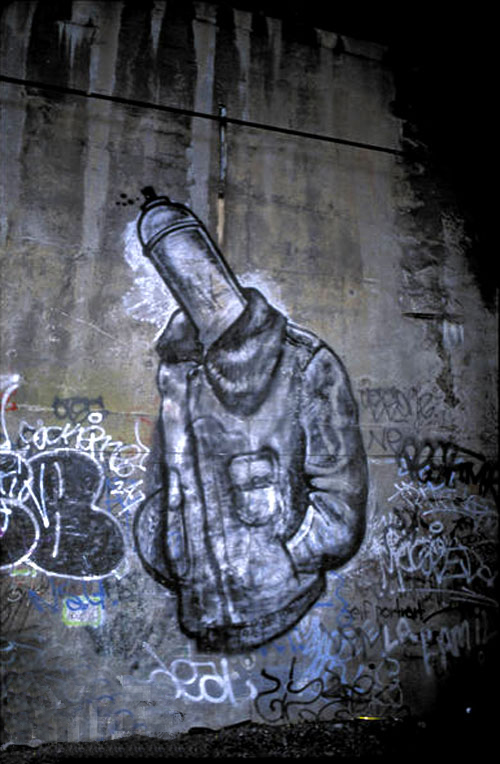 In his current Dirty Pilot show FREEDOM has returned to some of his more iconic images as well as playing with the juxtaposition of some of the signs and the surrounding environment. FREEDOM has also broken down a sketchbook for the show, selecting images that he considered to be highly autobiographical, as well as graffiti pieces and some of the published works from the Stayhigh 149 book.
Check out these Iconic images Now thru October 12th.

Born in 1960, Chris Pape began painting trains in 1974 as a teenager in New York using the name GEN 2. His early train painting career came to a halt as he entered the prestigious La Guardia High School of Music and Art in 1976. The Music and Art curriculum was ambitious and gave him a foundation in skills as diverse as printmaking, watercolor and oil painting. After leaving home, the artist returned to graffiti in 1979 with his new name FREEDOM. While painting graffiti on trains he noticed he was able to get grey tones while rendering in silver and black, with the tones he realized he could draw with paint.

In 1980, while exiting Riverside Park, FREEDOM watched as joggers stopped and stared into a grating above an abandoned tunnel. That March he painted something that would stare back, a twenty-foot high mural of the Mona Lisa. It was to be the beginning of a sixteen-year run of paintings and drawings that would come to be known as the Freedom Tunnel.

In the 1980’s FREEDOM had one foot in the gallery scene, showing with CRASH, Jean Michel Basquiat, FUTURA and others. In 1989, with the emergence of the “Mole People” in the tunnel he chose to abandon his gallery career and focus on painting and drawing the homeless. In 1996 the tunnel was closed off and the artist painted his final work titled “Buy American”.

Chris Pape has continued to keep busy, reemerging as an author and filmmaker, and considered by many to be the leading archivist of the New York subway graffiti movement. He has continued painting the entire time, doing commissions for collectors around the world usually based on the eclectic works in the Freedom Tunnel. His most recent mural was done for LA Moca’s “Art in the Streets” show.