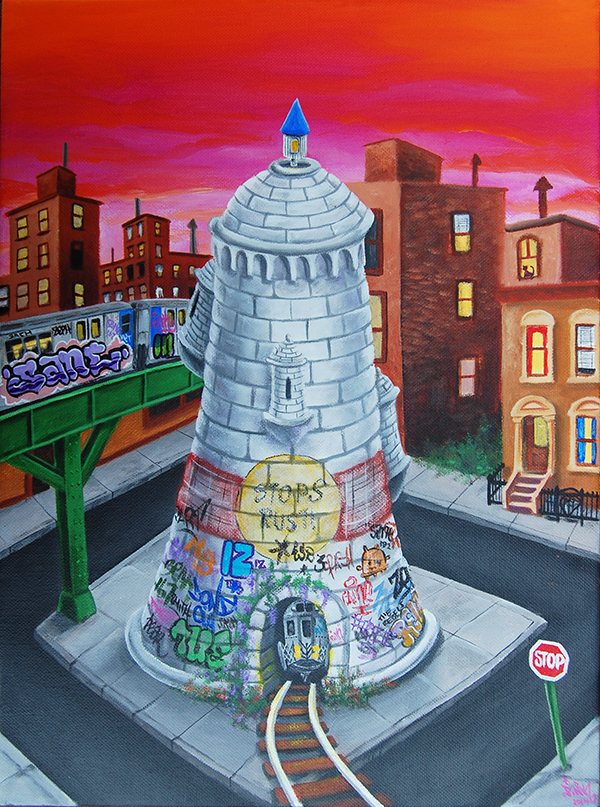 Lady Pink was born in Ecuador, but raised in NYC. In 1979 she started writing graffiti and soon was well known as the only female capable of competing with the boys in the graffiti subculture.

Pink painted subway trains from the years 1979-1985. She is considered a cult figure in the hip-hop subculture since the release of the motion picture “Wild Style” in 1982, in which she had a starring role .

At the age of 21 had her first solo show at the Moore College of Art. As a leading participant in the rise of graffiti-based art, Lady Pink’s canvases have entered important art collections such as those of the Whitney Museum, the MET in New York City, the Brooklyn Museum and the Groningen Museum of Holland. She has established herself in the fine arts world, and her paintings are highly prized by collectors. 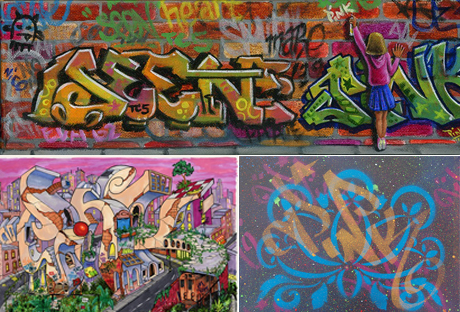 Blade & Portia are happy to announce the arrival of his new book.
256 pages with 653 photos of trains from the 70s-80s & chockfull of
personal photos of the Original Crazy 5 Members.
Special thanks to Roger Gastman & Chris Pape for producing such a Blockbuster of a book! 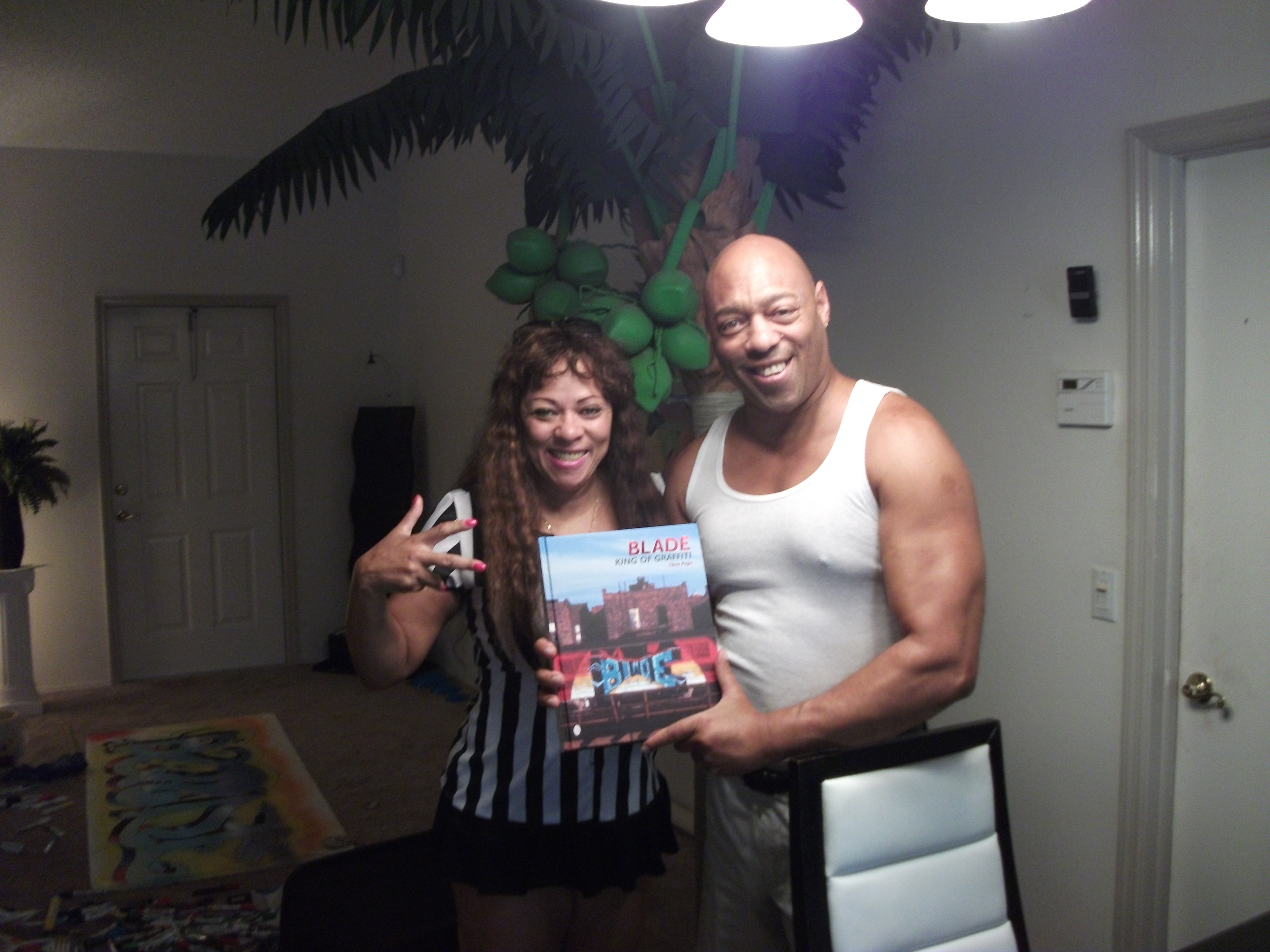 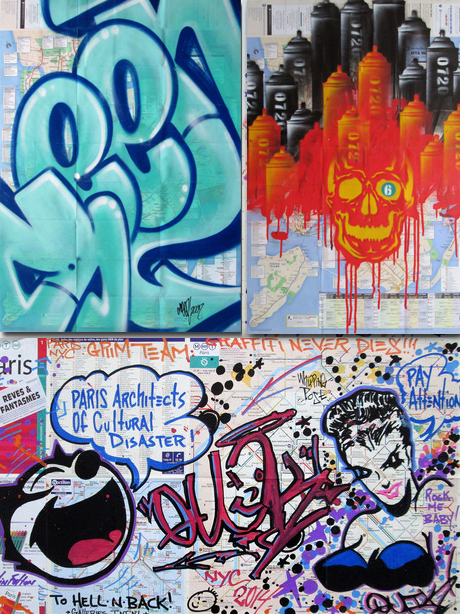 QUIK & SEEN Maps grace the cyber walls of DirtyPilot this month. Check out quintessential QUIK maps adorned on Paris, Brussels and NYC transit Maps.
We are stoked to also offer full SEEN maps. Its a rare occasion when you get this four letter word all on one map. Recently the only one we know of sold at Artcurial in France for big bucks!!. Accompanying these classics, are other styles including SEEN’s iconic imagery, skulls, spray cans and tags. 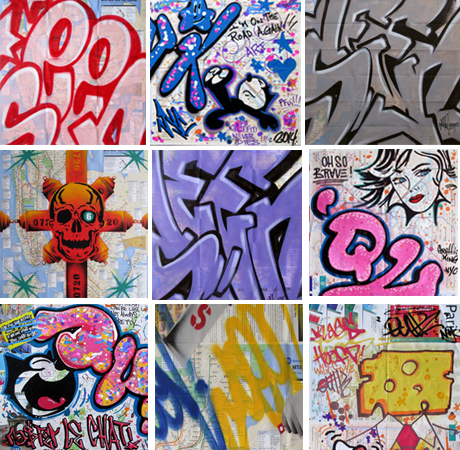 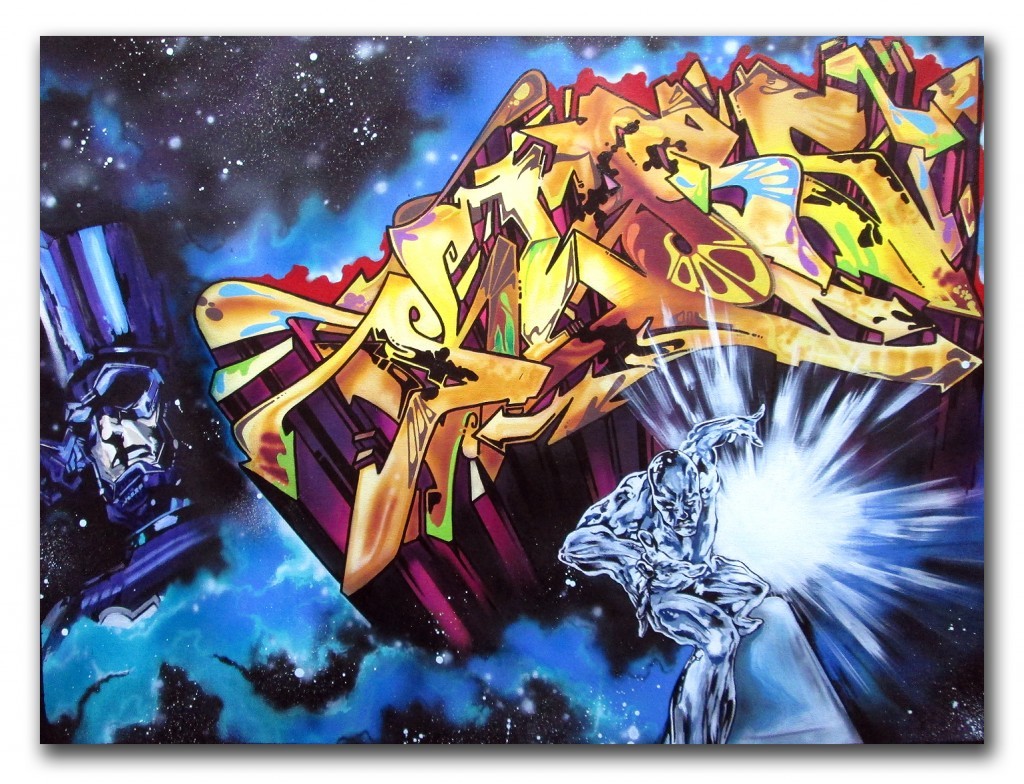 DirtyPilot Presents – KLASS RTW “Incarcerations and Colabs”
A body of work consisting of collaborations with graffiti legends DR REVOLT, QUIK, PART ONE, JR and his old partner SHAKER 179, along with solo masterpieces and drawings from the “Inside.”
Join us today thru January 15 for this amazing show!!

Klass’ graffiti was born of East Harlem “the Gates of the Ghetto” as the main partner of Shaker 179 RTW TFA TDS.

Together, they bombed streets, highways and subways throughout the city starting in the early 80’s before retiring briefly in 1988. 1990 was a comeback year for him and a new generation of TDS artists who were painting large scale illegal walls mostly in Harlem. A neighborhood so rich in graffiti history. He has painted with the best of the best of NYC writers like Dr. Revolt, Zephyr, Quik, Shaker, Part 1, A-One, Toxic, Ezo, Smith, Tracy 168 to name a few. He was partly responsible for a historic comeback of “Zephyr” in the early 90’s when they painted many walls, highways, and freight trains pretty hard with Lady Pink and Smith, Omni 156, etc… Klass was also a friend of the late great Rammelizee since the early 80’s and holds down 2 letters in the alphabet of the iconoclastic master… P1 and F1…

He’s had one man shows in NYC (Kanvas Gallery), Chelsea, and Los Angeles (Atmosphere Gallery). The Englewood Public in NJ. He’s been included in many group shows in America, South America, France, Holland, Greece, and is in many prestigious collections including the Gran Palais (le tag) collection, the government of Greece, the center for Cuban Studies and others… Today Klass travels as much as possible but lives and works in NYC. 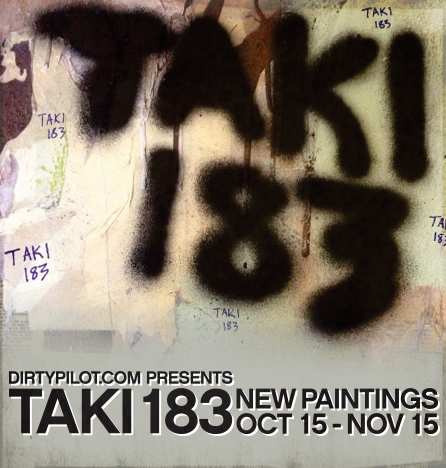 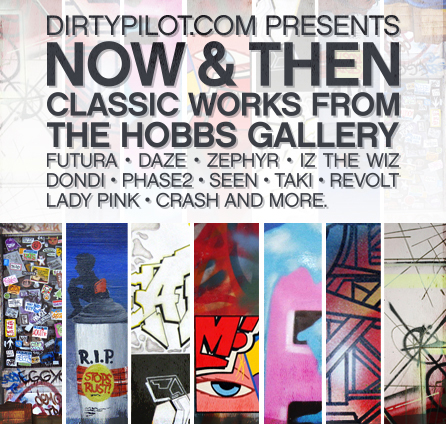 DirtyPilot Presents – NOW & THEN – Classic works from The Hobbs Gallery

From now through September 10, we will be teaming up with our friends at The Hobbs Gallery to provide you with an exclusive collection of rare, important graffiti. Dirtypilot.com proudly presents: Now and Then, a unique sale consisting of works from 1981 to the present.

For this summer only, Dirtypilot will offer paintings and works on paper by graffiti legends such as ZEPHYR, LADY PINK, FUTURA, PHASE2, IZ THE WIZ, DONDI, SEEN, TAKI, DAZE, REVOLT, CRASH, and many more. Check back often, as we will be updating our inventory all summer long! 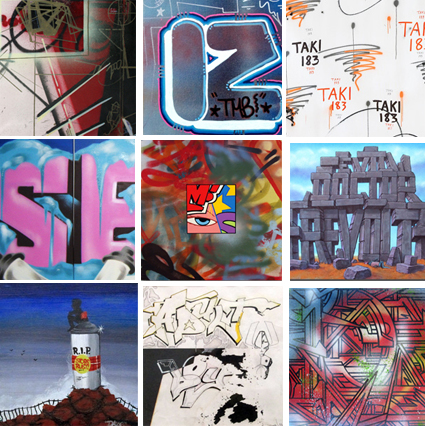 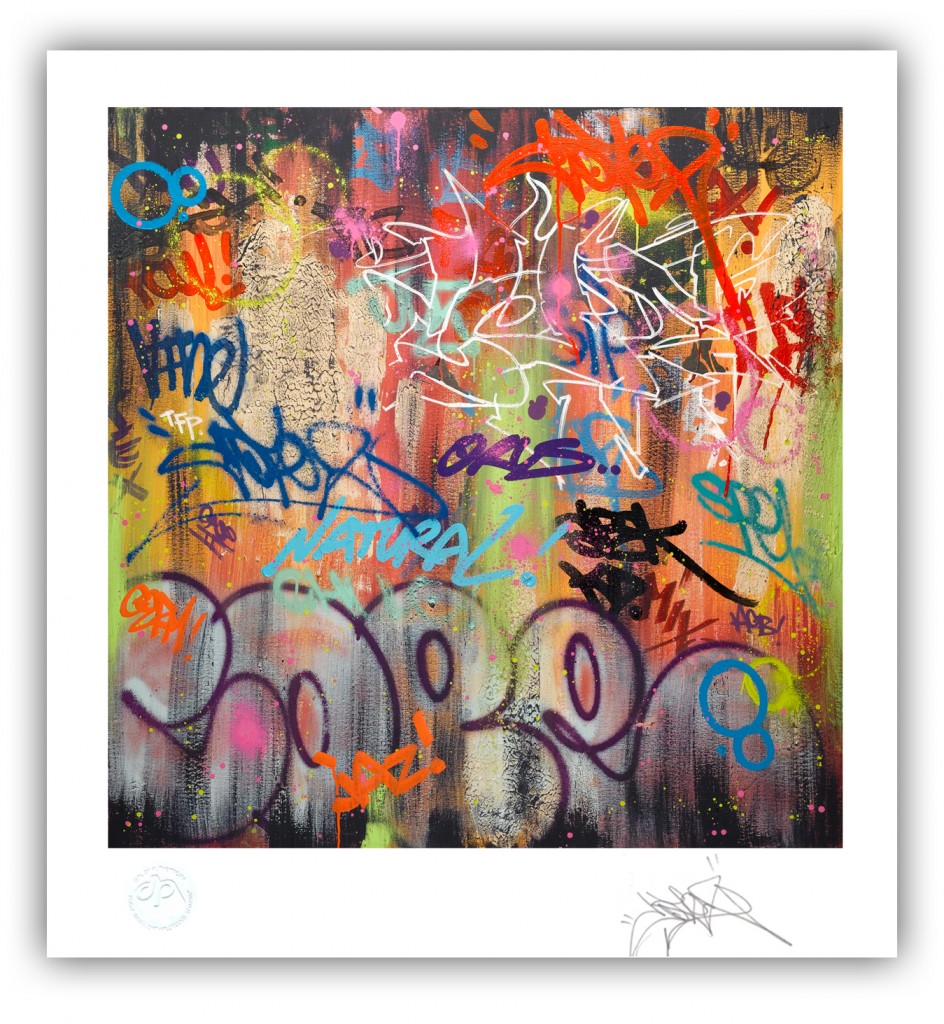 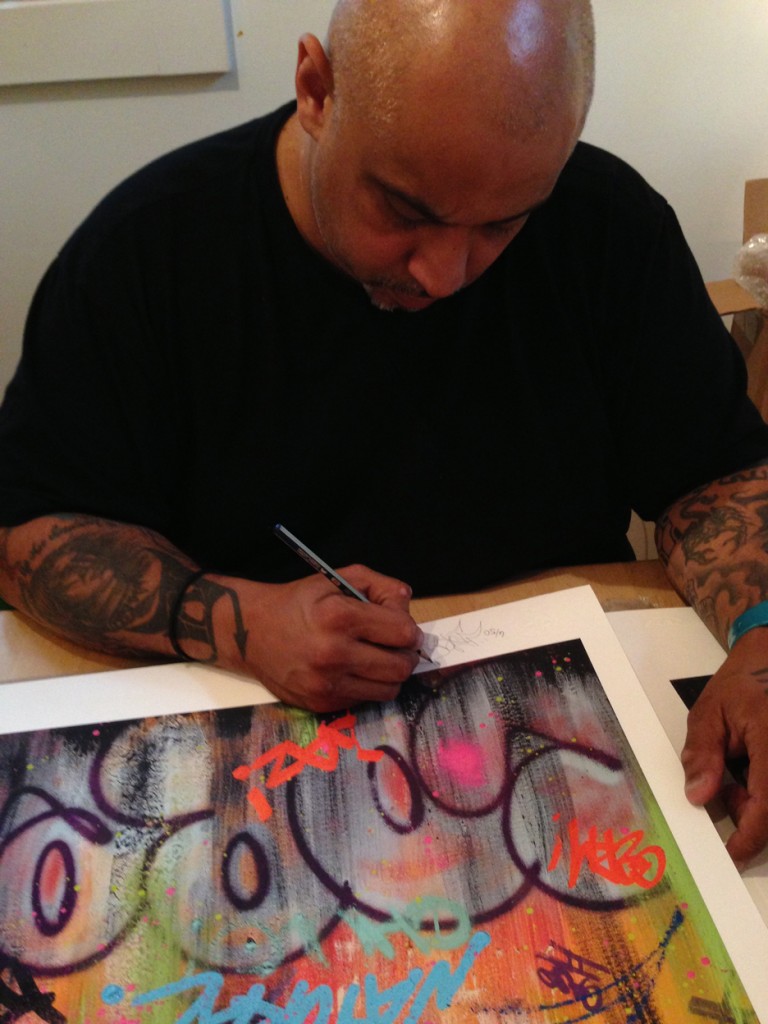 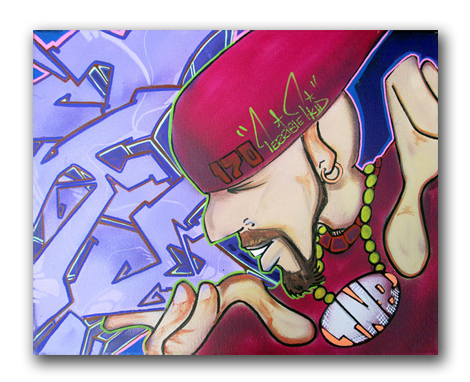 Julius (Tkid170) Cavero was raised in the South Bronx. At that time the streets of the south Bronx where a dangerous place for a young boy, the streets here full of Gangs and drugs and there was not a young boy like Julius could do, but to be a part of his environment. Julius started to scribble graffiti in a neighborhood park. He was approached by neighborhood gang and told that if he wanted to write graffiti he would have to join the gang or they would hurt him every time they saw him. So Julius had no choice but to be part of that gang. He started writing (king 13) and the name of the gang (Bronx Enchanters) everywhere. He continued the gang life till he was shot 3 times in a park by another gang when he refused to take off his Gang jacket.

While Julius was in the hospital he realized that none of his friends from the gang came to visit him. Only his mother and his brother would come and see him. He decided to never again be part of any gang and he changed his name from king13 to T.kid170. When T.kid left the hospital he went straight to the train yards and leaves the gang life behind. Graffiti became his life. He dedicated to turn those steel monsters in to rolling works of art that brightened the darkest tunnels of the New York City subway system. Tkid was renowned for his letter style and use of colors. He was one of the first Graffiti artist to start painting Graffiti on canvas when he was invited to be a part of the Sam Esses project in 1980, some of the other artist that where a part of this project where Futura2000, Zephyr, Haze, Bilrock to name a few.

In 1982 T.kid left the subways and painting graffiti illegally so he could exhibit his art in Galleries all over NYC. His first exhibit was at the 1199 gallery. This was the working people`s gallery and all his work was sold. He later exhibited in the Fashion Moda gallery. and the Fun gallery. Ok Harris, P.S1, Sidney Janice Gallery and countless small galleries in the SoHo area of lower Manhattan. Eventually T.kid would travel to Europe painting his first mural for T.D.K cassettes on a bill board in Vauxhall crossing in the heart of London England. Later on Exhibiting in Galleries in Berlin Germany, Paris France, Stockholm Sweden, Madrid Spain, Johannesburg South Africa and Countless other countries.

Most recently T.kid has been selling his art In Auction houses such as Phillip Depury & co and Guernsey’s to name a few. He has sold work to countless collectors such as Marc Ecko a giant in the clothes manufacturing business and Gunter Sachs world renowned philanthropist.

T.Kid`s auto biography of growing up in the South Bronx (The Nasty Terrible T.kid170) was sold out in its first and second publishing. He continues to travel the world influencing a new generation of artist spreading his message of hope. That no matter where you come from you can succeed if you only try. 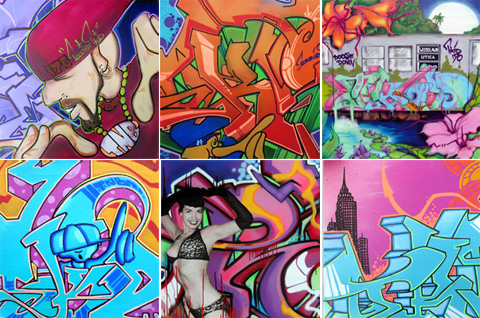 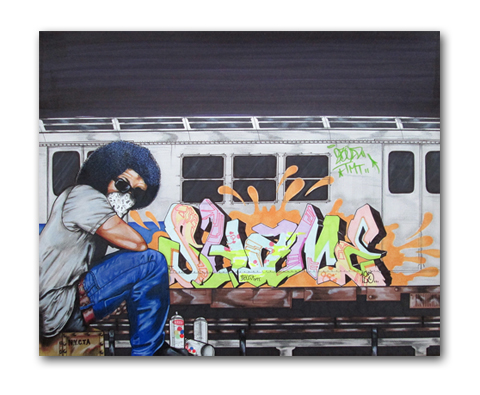 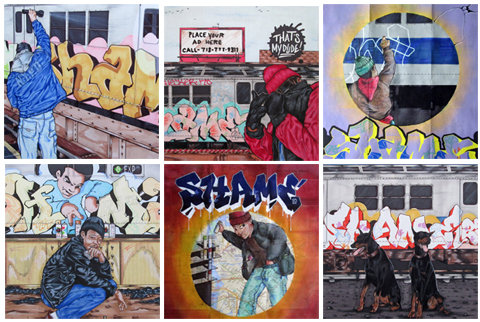 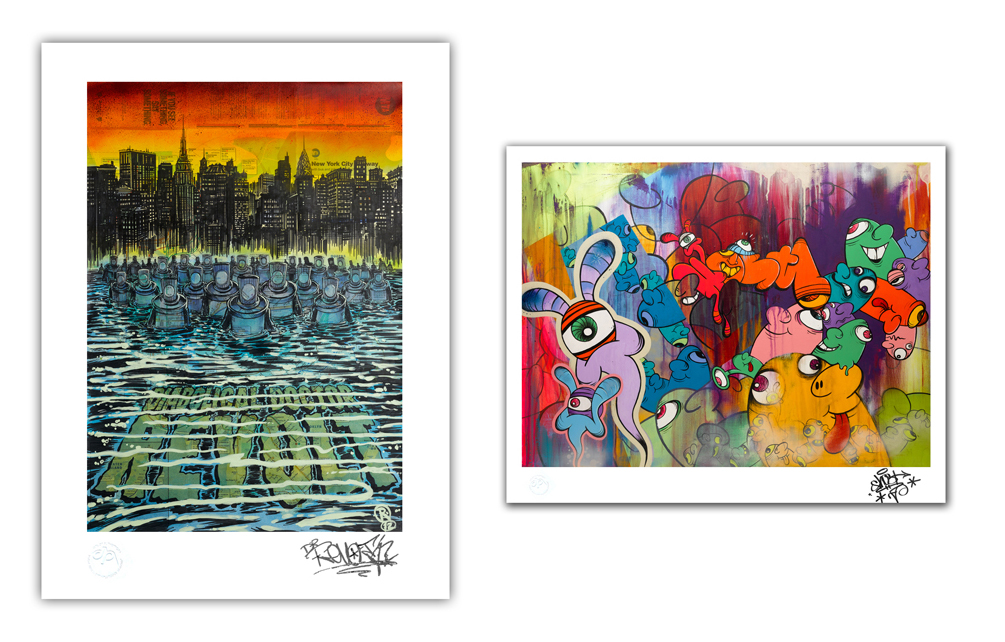 GHOST print titled “GEE’s) is an edition of only 50. Sheet size measures approx 22″× 24″ . Each print is hand signed and numbered by GHOST.