One of my favorite artists has past away today. We have collected his paintings for years which can be seen at www.hobbsgallery.com

Acclaimed artist Ernie Barnes, best known for his unique figurative style of painting and whose work was immortalized on classic television and album covers, died last night, according to reports. He was 70 years old.

According to his official biography, Barnes was born July 15, 1938 to Ernest Sr. and Fannie Mae Geer Barnes during the Jim Crow era in Durham, North Carolina. As a child, young Ernest would accompany her to work and was allowed to peruse the extensive collection of art books. One day in junior high school, a teacher found the self-admitted fat, introverted young Barnes drawing in a notebook while hiding from the bullies who taunted him daily.

For over 40 years, his art has been admired and collected internationally. His national traveling “Beauty of the Ghetto” exhibition in the 1970s featured some of his timeless works as “Storyteller,” “High Aspirations” and “The Graduate.” His famous 1971 “Sugar Shack” dance scene appeared on the “Good Times” television show and on the Marvin Gaye album, “I Want You.”

Enjoy these images of his work! 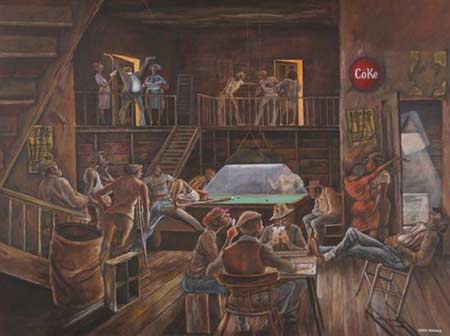